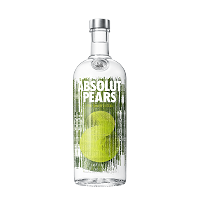 The juicy ripened character of Absolut Pears is fruity in flavor, and smooth. Its distinctly pear aroma and taste calms the palate with a hint of freshness.