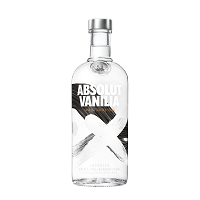 Absolut Vanilia's rich character blends together vanilla, toffee, and caramel flavors. Its balance of sweet and smooth come together in harmony.