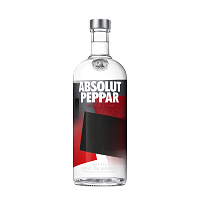 The warmth of Absolut Peppar welcomes with a pleasantly spicy character of green bell pepper and jalapeno. Its complex and smooth taste is subtly sweet and enhanced with a hint of bold black peppercorn flavor.