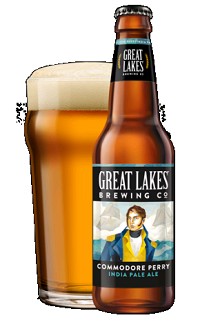 What’s this? A British-style IPA named after the man who defeated His Majesty’s Royal Navy in the War of 1812? Consider this a bold, hoppy (and mildly ironic) plunder of war. Technical notes ABV 7. 7% IBU 70
Food pairing Spicy foods, carrot cake, and glorious sideburns
Producer Two Irish brothers with limited brewing experience. A city that shuttered its last production brewery in the early 80s. A neighborhood in serious need of a facelift. In 1986 when Patrick and Daniel Conway opened their fledgling operation in Cleveland’s Ohio City neighborhood, the odds were stacked against them. Fortunately, they surrounded themselves with a staff of passionate, knowledgeable people, and from the start committed themselves to bringing a sophisticated, diverse selection of craft beer to their home state. Two decades, multiple awards, and a whole lot of stories later, Pat and Dan Conway celebrate over two decades of brewing exceptional beer for their adventurous and discerning customers.