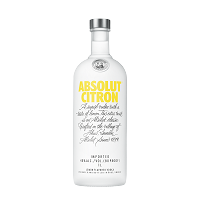 The vibrant and fresh aroma of Absolut Citron showcases a straightforward and well-balanced lemon flavored vodka. Complimentary citrus notes of juicy lemon and a hint of tangy lime brighten the palate.