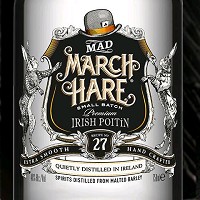 Mad March Hare uses only the best, locally sourced, malted barley. As you would expect, fine Irish Poitin needs fine ingredients and most of our suppliers are farmers within a couple of miles of our stills, with equally rich histories in the growing of the this key ingredient. As one would expect, their covert deliveries are made in the dead of night.

Commonly used to distill whiskey and brandy, copper pot stills were first used in the production of Irish Poitin. We retain that long and rich tradition with Mad March Hare, as copper has catalytic properties that more modern column stills cannot match. If it ain't broke Oh, we forgot to mention, we are triple distilled! Recipe No27 harks back to a bygone era in Irish distilling. Such was the demand for Mooney's famous Poitin; he braved the wildest Irish weather and the long arm of the law to serve his loyal customers. His powers of evasion were only matched by his powers to distill. After all, it only took him 27 attempts to get it just right!

Producer
In the early 1900's, great change was on the horizon in Dublin. Whilst literary greats such as WB Yeats, Bernard Shaw and James Joyce flourished, political debate and rebellion were formenting. Thankfully, there was always one constant: Poitin continued to fuel Ireland's creative soul and remained at the very heart of Irish society. Enter Mooney, stage left Mooney epitomised the rebellious Irishman of old. Under the guise of a fruit & vegetable business, he distributed his famous Poitin throughout the land. Mooney had developed an infamous relationship with the law and was affectionately known by locals to be as mad as a March Hare. His tipped bowler hat did little to dispel this fitting moniker!

Irish Hares (lepus timidus hibernicus) are found throughout the wilds of Ireland. Their breeding season peaks in March, when they are often seen brawling in open fields, to win the admiration of deviant females. The term as mad as a March hare is often used to describe someone who is easily excited and unpredictable. Mooney fit the bill just nicely!