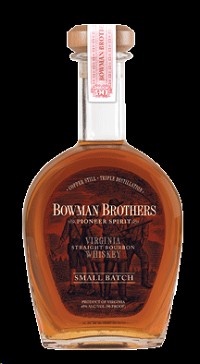 John, Abraham, Joseph and Isaac Bowman were Virginia militia officers in the American Revolutionary War. In 1779, they led thirty pioneer families to Madison County, Kentucky and established Bowman's Station. Later, the brothers helped establish and settle Fayette County. They were legends, admired and respected by fellow settlers for their courage and bravery. This hand-crafted bourbon whiskey is a tribute to these four heroic Bowman Brothers.

Producer
A. Smith Bowman Distillery
A. Smith Bowman's distilling roots date back to the years before prohibition, in Algiers, Louisiana. In 1935, after the Repeal of Prohibition, Abram Smith Bowman and his sons relocated to Virginia continuing the family tradition with the distillation of bourbon. The original distillery was located on the Bowman family homestead in Fairfax County, Virginia called Sunset Hills Farm. The distillery's hallmark bourbon called Virginia Gentleman was first created in small-batches to ensure meticulous control over the quality of each bottle. In response to the rapid growth of Northern Virginia, the distillery was moved in 1988 and is now nestled in the historic city of Fredericksburg in Spotsylvania County, 60 miles away from the original location.

The Distillery Today
As a small and privately owned company, The A. Smith Bowman Distillery continues the time-honored traditions on which it was founded. Considered a micro-distillery by today's standards, A. Smith Bowman produces an assortment of hand-crafted sprits distilled from only the finest natural ingredients and using the latest technology. This micro-distillery focuses on the production of premium spirits honoring the legacy of Virginia's first settlers. Looking ahead the micro-distillery has innovative ideas for new and different small batch products of all sorts which will honor the rich distilling tradition dating back more than 60 years.