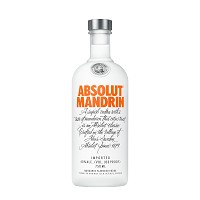 The taste of summery orange peel and citrus fruits pair perfectly in this truly mandarin flavored vodka. The fruity and fresh character of Absolut Mandrin is as rich as it is smooth.

Review
Absolut Mandrin, an exciting flavored vodka from Absolut. This rich, fruity, full-bodied vodka captures the distinct flavor and character of mandarin oranges, along with a hint of sweetness and a note of orange peel. The finish is smooth with a long aftertaste.