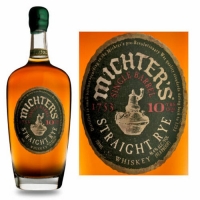 Deep notes of vanilla and toffee, toasted almonds and cinnamon with an ample dose of crushed pepper and a hint of orange citrus.