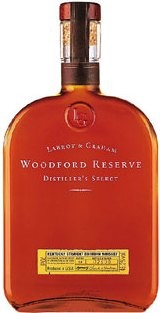 Make way for Woodford Reserve Distillerâ€™s Select, the â€œOfficial Bourbonâ€ of the Kentucky Derby AND the Breederâ€™s Cup! Perhaps itâ€™s how the horses stay so cool and collected during the race? It is, after all, the â€œThoroughbred of Bourbonsâ€. This small batch bourbon comes from a distillery originally built by Elijah Pepper in Versailles, KY in 1812. It is currently one of the oldest of the nine still functioning distilleries in Kentucky. In 1878 the distillery was purchased by Leopold Labrot and James Graham, who (except during Prohibition) operated it until 1941. Due to severe war-time restrictions, Labrot & Graham went bankrupt, and the distillery was sold to the Brown-Forman company of Louisville, KY (who also owns the Jack Daniels and Old Forester brands). Despite the sale, the distillery retained the Labrot & Graham name. Brown-Forman sold it after just three years, only to re-purchase it 23 years later in 1994 and subsequently spent over seven million dollars renovating the property. The distillery was officially renamed as The Woodford Reserve Distillery in 2003 and is one of the official stops on the Bourbon Trail. The nose is quite woody and has light notes charcoal and dark chocolate. On the palate, it is smooth with subtle spice. It has a delicate woody sweetness, but not quite as potent as the nose. The finish is long and dry with a flowery twist. A hint of wood still lingers.

Sort by: Write a review

I buy these as gifts for my employees. It's a great value for the quality of the bourbon. Woodford is a great brand that makes great tasting bourbon.